** With the exception of check-in and closing times, the exact schedule may vary from camp to camp. The NKS Staff will inform all camp participants of any changes. 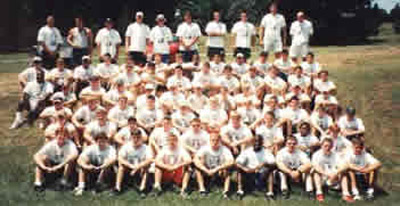 Centrally located and easily accessible to the Mid-Atlantic Region, McDaniel College, in historic Westminster, Maryland is only 30 miles from Baltimore, 66 miles from Washington D.C., and 60 miles from Harrisburg, Pennsylvania. The beautiful 160 acre campus with its traditional buildings, classic charm, and on campus golf course, is surrounded by forests and fields. The hilltop campus offers breathtaking views of the Blue Ridge Mountains. McDaniel College is an ideal site for a football kicking camp. The Baltimore Ravens conducted their summer camp there until 2010 when they built their own facility just down the road in Owings Mills, Maryland. The NKS camp utilizes the same facilities the Ravens enjoyed including the artificial turf stadium which was installed by the Ravens.

While McDaniel College competes (quite successfully) at the Division 3 level, the athletic facilities are those of a much higher intercollegiate level of competition. The overnight accommodations for the NKS camp are more of a luxury apartment than a typical college dormitory. The camp is housed in the “North Village Apartments” which provide campers modern suites with a complete kitchen and living room. It’s a short walk to the field, dining hall, and meeting rooms.

McDaniel College was founded in 1867 and known as “Western Maryland College” until 2002. It is a private liberal arts college with 60 undergraduate and more than 20 graduate programs. It is profiled as one of the 40 colleges in the book, “Colleges That Changed People’s Lives”. In 2011, The Weather Channel ranked McDaniel College 6th in the USA as “Best Tailgating Colleges” due to the ability for fans to park their cars practically on the football field and actually grill and drink, a tradition that dates back to the 1920’s. McDaniel College annually ranks in the “Top Five” for average Division 3 attendance.

Whether you’re staying in the Westminster area, venture off to the nation’s capital, take in a Baltimore Orioles game, or visit the nearby Blue Ridge Mountains, this special region of the USA offers a multitude of activities for all. And don’t forget Gettysburg National Park. While the park is visited by thousands yearly for its obvious historical significance, people come to the park for the sheer beauty of the rolling hills and sweeping vistas. Here is a short list of area attractions.

How do I register for camp?

You may call or email Coach Muriaty for a brochure/application or sign up online. For online registration, please follow the instructions below.

Our online registration requires approval by a Parent or a Legal Guardian by typing their name in the text box at the end of the online registration page. Registering online gives you the option of paying for a camp with a credit card through Stripe. CLICK HERE to view camp rates and additional information. If you choose to pay by check, please make checks payable to National Kicking Service and mail your payment to:

“I have had the opportunity to work and train with NKS Director Gene Muriaty. He is absolutely one of the most knowledgeable and passionate place kicking and punting instructors in the USA!“

“Jim Power brings his years of professional experience to help young kickers improve their ability. I recommend attending his camp.“

“Gene Muriaty is an exceptional kicking and punting coach. I highly recommend him and his program to anyone interested in improving their skill.“

“Jim Power has the ability to translate his kicking experience into the teaching of mechanics for young kickers. He understands how to avoid the flaws and pitfalls that prevent a kicker from being able to take his game from level to level to develop to maximum potential.“